Forum Supporter
10 years of FIF
i want to know every players's contract runs until when? i cant find them,can someone pls post them.
F

This will be quite slow but I will do what I can,ok?

This isn't as easy as I thought!

Forum Supporter
10 years of FIF
Most Important Member
What is your source, Fabio?

Forum Supporter
10 years of FIF
thank u i love inter ,but if someone knows more pls post them,i really want to know.
F

I did all that I could!

Crap like he played last year and yesterday we should kick him out right now. 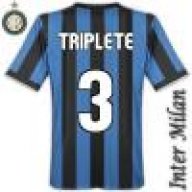 FIF Special Ones
10 years of FIF
Adriano you're just reacting to the Chievo game, as we all did at some point.

I was livid at the end of the game, then I calmed down.

Toldo was terrible, that's for sure. But he's our Toldone, I'm sure he'll be great on Tuesday. Same goes with J Zanetti. And if you consider that we played with one central defender and a mummy alongside him, we can't judge our defense yet.

We'll be able to make better judgements on Saturday after the Palermo game, when Matrix-Cordoba will probably have played twice together.
M

Well You are totaly right...We should wait and see in a few games and then make some conclusions....Then all of our first choise defenders will be redy. I hope that Toldo improves which he probertly will...But in case he dosen't we still have Carini so it will not be total disaster.
F

Forum Supporter
10 years of FIF
I noticed Toldo performance depends many times on the importance of the game and opponent...I mean he is superb against a team that just hammers our defence like those Valenica games for example. Against smaller teams or where they play on the counter he is average,maybe because he is less active that he seems not hands on literally..

Dont know maybe its our whole defense also not just Toldo..Hope both get better with every game.
C